All About Brenham Texas

Brenham
Brenham ( BREH-n?m) is a cities in east-central Texas in Washington County, United States, with a population of 15,716 according to the 2010 U.S. census. It is the county seat of Washington County. Brenham is south of College Station, and about halfway between Houston and Austin approximately 70 miles (110 km) northwest of Houston, and about 90 miles (140 km) east of Austin.Brenham is renowned as the heart of the bluebonnet region in Central Texas. The local chamber of commerce promotes the Bluebonnet Trails and offers free maps to guide visitors along the most scenic wildflower routes, which also pass historic sites and attractions.Washington County is known as the "Birthplace of Texas," as it contains the site of the signing of the Texas Declaration of Independence on March 2, 1836 in the town of Washington-on-the-Brazos. This is now a state historic site.Brenham is also known for its annual German heritage festival that takes place each May called Maifest, similar to Volksfest. Numerous German immigrants settled here in the mid-nineteenth century, following the Revolutions in German states in 1848.Brenham is also the Home of "The World's Largest BBQ Pit" on 290 West. 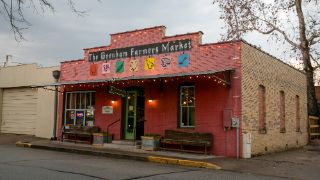 Brenham is located in Washington County