All About Gun Barrel City Texas

gun barrel city >> all about


Gun Barrel City
Gun Barrel City is a City in Henderson County, Texas, United States. The population was 5,672 at the 2010 census, up from 5,145 at the 2000 census.The town began as an unincorporated community known as the "Old Bethel Community" in the 1960s after completion of Cedar Creek Reservoir. It was incorporated in the late 1960s so it could legally sell beer and wine. The City takes its name from a former road, Gun Barrel Lane (which is now State Highway 198), as has as its motto, "We Shoot Straight with You", and its symbol – a rifle with two crossed antique pistols after having to remove Yosemite Sam as its unofficial mascot that once graced its signs along the road at the City limits. It is rumored that Gun Barrel Lane got its name during the 1920s and 1930s when Jesse Daniels frequented the area. It was considered a safe backwoods place during Prohibition when the likes of Clyde Barrow and Bonnie Parker hung out in the area. The road got its name for simply being "straight as a gun barrel" for two miles between hwy 175 and hwy 334 to the south. A local resident, Mr. C. L. Wait, lived along the road and was known for sitting at the window of his house with a shotgun sticking out the window. It was his way of deterring those he deemed unwelcome on this back country road. 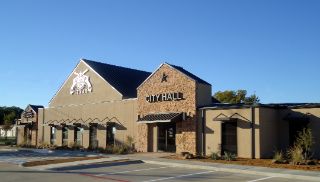