All About Edna Texas

Edna
Edna is a cities in Jackson County, Texas, United States. The population was 5,499 at the 2010 census. Edna is the county seat.Edna is the gateway to 11,000-acre (45 km2) Lake Texana, which covers the site of Texana, Texas. Edna has a hospital, convalescent home, library, museum, cities park with swimming pool, three banks, two savings and loan associations, a country club with a nine-hole golf course, and Oak Creek Village, a retirement community. It is the center of a prosperous agricultural area with petroleum and natural gas production and has an active chamber of commerce, oilfield service industries, and two grain elevators.On the courthouse lawn is a monument to Irwin Moore Laughter (1893 - 1916) of the United States Navy, who was killed in Mazatlan, Mexico, during the attempt by U.S. forces to capture the Mexican revolutionary general Pancho Villa. 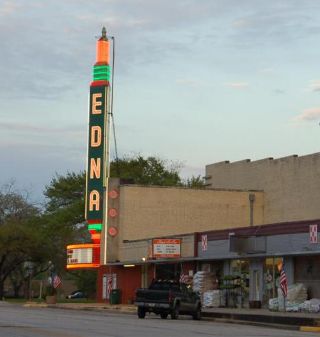 Edna is located in Jackson County